What you Need to Know about the new Public Charge Rule

What you Need to Know about the new Public Charge Rule 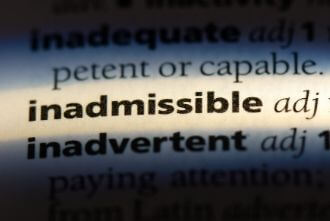 On August 14, 2019, the Department of Homeland Security (DHS) announced its new rule that changed how U.S. Citizenship & Immigration Services will determine inadmissibility on the grounds of public charge.   “Public charge” is a ground of inadmissibility. Grounds of inadmissibility are reasons that a person could be denied a green card, visa, or admission into the United States. It is not a test that applies to everyone.

The new rule was scheduled to take effect on October 15, 2019; however, multiple federal courts issued injunctions that temporarily stopped the rule from taking effect as scheduled.  On January 27, 2020, the U.S. Supreme Court lifted the nationwide injunction which was preventing the rule from going into effect.  The new rules will go into effect on February 24, 2020 (except for individuals residing in the State of Illinois).

These rules will also affect individuals applying for nonimmigrant and immigrant (green card) visas at the U.S. Embassies and Consulates as the Department of State will be issuing its own guidance and set of new forms to be completed by applicants who are consular processing.

In deciding whether to grant an applicant a green card or a visa, an immigration officer must decide whether that person is likely to become dependent on certain government benefits in the future, which would make them a “public charge.”  The new rule will govern how USCIS will consider totality of the circumstances and make a forward-looking determination as to whether an applicant will likely become a public charge. It essentially shifts the focus away from the U.S. petitioner to the foreign national applicant.

There are different analysis that will take place depending whether an applicant is applying for adjustment of status (green card) or a change or extension of a nonimmigrant status.  Consult with your attorney to determine what criteria will be used in your unique situation.

Its important to note that this new rule is not retroactive and will only apply to applicants that file after February 24th.  There are classes of foreign national applicants that are exempt from or eligible for a waiver of the public charge determinations.

Here is a chart of what is and is not included in the definition:

The new analysis of public charge will weigh the positive and negative facets of the following factors:

Heavily weighted negative factors that are identified in the rule are:

Heavily weighted positive factor in the rule are:

Contact us for additional information related to this topic and for advice regarding how to navigate U.S. immigration laws.